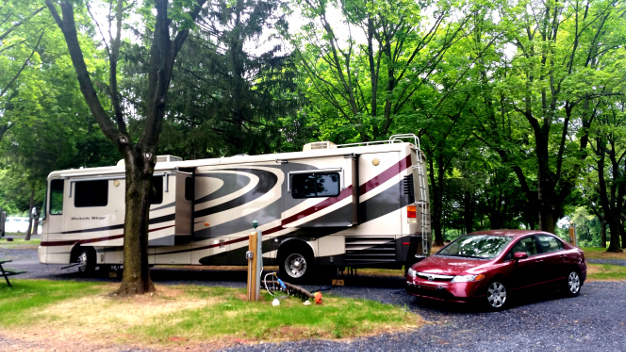 After leaving Arab at 4:30pm on Friday June 3rd, we stopped at a Walmart in Marion VA for a free dry-dock and it was quiet, restful, and very safe.?? There were a couple of Semi trucks and other campers of all varieties, including a 5th wheel that took the liberty of using their slide-outs.? But there was plenty of room for everyone.

We ran our generator and I had loaded the tanks with water so we had running hot/cold water, microwave, shower, toilet, air-conditioner, and TV.? What else would you need for roughing it in a Walmart parking lot ?

On the 5 and half hour drive from Marion to Harrisburg we saw deer, fox, a scared little beaver that was trying to cross the interstate, and the traffic was moderate.? We also saw a lot of beautiful American Farmlands that brought back fond memories of the “good ole days”.

We encountered a small shower from the entry of PA until we reached Harrisburg East on Friday June the 4th at roughly 4:30 ( Arab time ).?? We stopped several times for stretch breaks, and coffee.? Pilot, Flying J, and a couple of Cracker Barrels.? BTW – that new berry dessert is absolutely worth the price, and the photo doesn’t do it justice.? It is HUGE – enough for 2, but I struggled through it alone.? 😉

The only thing I can think of that would make this trip better was if my kids, and grand-kids could join us.?? There is a HUGE heated pool here and a very large playground with swings, human powered merry-go-round, teter-toter, and other things for kids to do.? Maybe next time…….