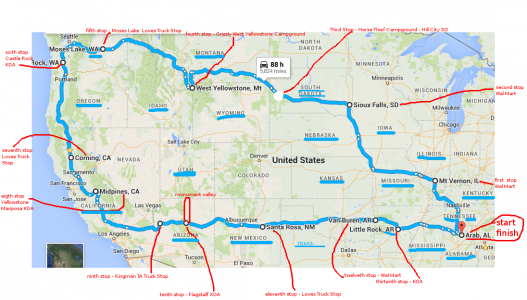 After a good nights rest from a long day of driving winding roads but mostly flat until we got near Yosemite.? We woke up at the crack of 9:30 and got ready for a day of sight seeing and adventures.?? We were not disappointed.? It is 99 degrees and all that stuff about “dry heat” has nothing to do with it !?? ITS HOT !

We saw a black bear crossing the road in front of us as we returned from Glacier Point, but it was too fast to get the camera ready for a photo so you will just have to trust us.? We also saw a crowd gathered in the road which usually means a wildlife sighting.?? It was a large grizzly and 3 smaller bears but too big to be cubs.? The larger bear was avoiding the crowd and staying in the woods.?? The smaller bears weren’t intimidated at all but we didn’t want to get too close and therefore didn’t get a great shot.?? It was breath taking to see them in the wild and eating their natural foliage.?? Soon after, the ranger showed up and told everyone to get their pictures and leave the bear alone. The drive from West Mariposa KOA in MidPines CA (population 432) is a sleep? little village town with a few good places to eat, sleep, and buy groceries.?? The KOA was 7 miles outside of town in the direction of Yosemite. (see photos in the slide show)

The drive to any of the 3 points of interest for us was definitely not RV friendly drives.? Our 3 points of interest were Yosemite Valley, Glacier Point, and Mariposa Grove for the big trees.?? It was good that we brought the toad (Honda Civic) for the touring. ? It was either major uphill or downhill to every point.

In Yosemite Valley we paid to get into the park and entry fee of $30 that was good for the week.?? We shortly came upon an unattended gas station with a sign that said “NO GAS IN YOSEMITE VALLEY”? so if you wanted gas you had to pay $4.36 for the cheap stuff.? We had fortunately filled up earlier so we were good and we only paid $3.86 per gallon outside the park at this cute little country general store that had a cooler like back in the 30’s for eggs and milk.?? Very nice lady running the store too. At Glacier Point we reached a point of 7214 feet at the top of Glacier Point. ? There was a view of 1/2 dome and using a telescope we could see multiple people on top of that dome. ? They had to have climbed it, or been dropped by helicopter because there was no elevator going up.

The Drive back down was just as scenic and maybe easier to view because we weren’t on the drop off side.?? Going up, there is no guard rail, just caution signs.? So it was a little unnerving to see the drop off of several thousand feet with no rail.

Mariposa Grove was our final stop and with the distance between all the points it was a good thing we started early.? It was quite a hike from the parking lot to the grove of HUGE trees.? Approximately 1.2 miles, but very steep uphill and hot. ? I would use a better word but HUGE is as large as I can think of.?? They were HUGE times HUGE.? See photos below.

While we were there we saw many grey squirrels running all over the place, and one large deer that didn’t seem to mind us intruding on his territory.? We say the “drive through” tree that you can no longer drive to it to drive through, but your car would have to be tiny to get through it anyway.?? We saw the tree named Grizzly Giant, and many others.?? However they seemed to only exist in this one spot.?? It wasn’t like the entire Yosemite area had these HUGE trees.

There were several people I would label “tree huggers” at the park that were quick to tell everyone what to touch and what not to touch, and don’t take any pine cones out of the park, and don’t step on the roots.?? OH! and one mother was educating her child that the sticky stuff on the tree was the tree’s blood.??? I poured tree blood on my pancakes this morning if that is the case. 😉

Tomorrow will be a day of nothing.? Just rest, and restock for the return journey through Barstow, and Monument Valley.

We stayed about 35 miles from Mt St Helens in a KOA at Castle Rock Washington.?? A very nice town and extra nice host family at the KOA.?? I give them a 11+ for making us feel welcome like old friends.?? They provided donuts and coffee free each morning, then they prepared a meal for all the guests to celebrate fathers day.? Bar-B-Q, hot dogs, chips, beans, slaw, and fixings.

The only improvement they could make would be to add 50 amp service to their sites for large RVs and a little more room between sites.?? I had to wiggle between my neighbor’s lawn chairs to disconnect my sewer, water, cable, and electric. I was afraid my tail swing was going to take out their awning.

With all that said, we would definitely recommend this KOA.

Leaving here early due to our long 2 day trip down to Yosemite we are planning to spend the night at a Loves, or TA truck stop.? When we got to the T/A at Anderson CA which was about a 10 hour drive, Norma would not sleep there because we didn’t make reservations and ask permission.? She called, and they ask that we setup in front of the store leaving the larger spaces for the commercial trucks.? There were some beggers and dope heads in front singing and dancing and she was not having any part of sleeping there so – back to the interstate we went.

Just for anyone planning to dry dock in California, this is the only state we have been turned down to stay at the two Walmarts we tried.?? Other states we found to be very friendly and tolerant of RV over night-ers.?? California is also the only state that makes every vehicle stop to ask them if they are bringing in any plants, animals, or fresh fruits or vegetables.? If you say no, they let you right in.? 🙂

We did overheat coming over the mountains out of Oregon into California, and again climbing the long winding hills into Merced California to get to our West Mariposa KOA.? Both times we had to pull off and let the RV cool down.? We idled the engine up a bit, and turned on the dash heater to draw heat out of the engine coolant. ? A neighboring camper said they had the same problem getting to this KOA.

Here are some photos of our long drive from Mt St Helens, through Oregon, into California, and down to Yosemite.?? The mountain scene you will see is Mount Shasta just as you enter the state of California on I-5 from Oregon.